I took the Test Formerly Known As Sun Certified Java Programmer (no idea what it’s called these days; Oracle Certified Professional or some such, I think), and passed with flying colours! 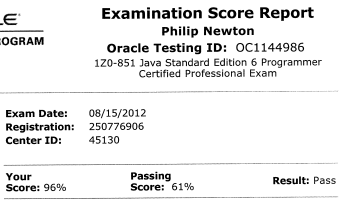 I got 96% compared to a passing mark of 61%, so I got two of the 60 questions wrong. (And given the two topics that the score report said I need work on, I’m fairly sure it’s one where I assumed that File.renameTo() took a String argument rather than a File and one where I had forgotten that Thread has a .run() method.)

So now I wait for the proper certificate, but whee! I is a SCJP!

Next step, possibly: SCJD. As in, the test that doesn’t test you on arcane syntax details and API method arguments, but actually makes you develop some software. Kind of like the difference between ivory-tower learning and actually showing you can get your hands dirty and construct something that not only works but was constructed properly. Though a co-worker is shooting for a Java EE Web Component Developer exam next.

Let’s see how the work situation plays out; I’ll probably try to start work on SCJD when it looks as if there’s a lull in between projects, which could be soon or could be a while. (There’s news about a new project, but we’re waiting for confirmation from the project leader, who will be coming back from holiday on the 20th.)