State of the Stella :: Picture of Amy writing her name

Stella's father is visiting us for a couple of weeks, and he invited us to McDonald's today for lunch.

Half-way through her burger, Stella started feeling unwell. She said she wasn't sure whether it was just her overactive imagination or whether it was really an allergic reaction, but she said she wanted to take a taxi home rather than wait for a bus, so I called one for her.

She went outside with Peter (her father) to wait for it, and I stayed inside with Amy, who wanted to play for a while. (She couldn't come with us anyway, since we didn't have a car seat for her and most taxis don't have one, either.)

I later heard from Peter that she vacillated between going home and lying down and going to the hospital and having a doctor look over her, but eventually opted for the latter.

At the hospital, they decided to keep her for observation at least until tomorrow.

When Amy and I visited her this evening (after a parents' meeting at the kindergarten), she was still not feeling too well, with her circulation being down, like the last time, but it didn't seem to be serious.

I still don't know whether it was imagination or a real reaction, though I heard that the doctors had seen a slight swelling in her throat this time. Understandably, Stella's rather wary of eating out at all now.

We expect her to be discharged tomorrow, though.

And here's a picture of Amy's name (click to see the photo page, where you can also see larger versions): 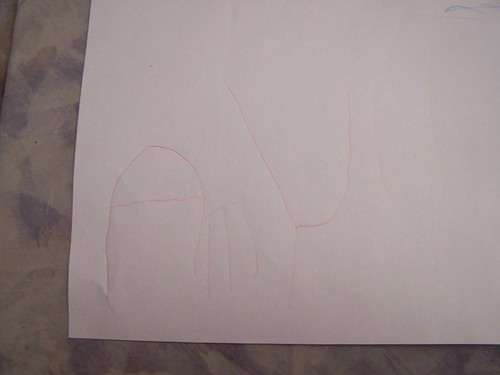